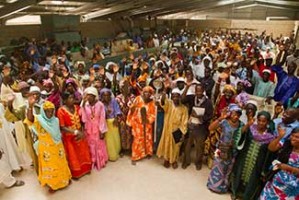 As part of Oikocredit’s strategic focus on agriculture, Oikocredit invests in several agricultural businesses in Africa, including Senegalese mango processing company, Les Saveurs du Sud SA. Although 75% of Senegal’s population works in the agricultural sector, much of the country’s rural areas remain underserviced in terms of electricity, drinkable water, agricultural equipment and irrigation.

Les Saveurs du Sud is based in the rural area of Casamance, the poorest yet most fertile part of this West African country, where agriculture remains one of the only sources of income for the population. Despite farming being the key economic sector in the region, producers are faced with poor infrastructure, low income levels and insufficient investment. This, combined with the region’s remoteness and volatile past has meant farmers lack access to export or even national markets for their produce.

While visiting Casamance, Oikocredit country manager for Senegal, Sambou Coly, saw that around 75% of the mangoes produced by farmers were going to waste or sold to middlemen at throwaway prices. Sambou said he saw the potential for an equity investment in a supply-chain, but first had to unite farmers. “The now president of the cooperative cycled round the region to ask local villages about existing groups and to see if they would like to join together to form a cooperative,” said Sambou. “In total, 21 surrounding villages had groups, so we then sent a partner organization to train local people on how to build the cooperative,” Sambou said. The farmer’s cooperative, now named Copex-Sud, has around 3,500 members which have come together to produce mangoes. A women’s association was also formed from members of Copex-Sud to grow other vegetables such as lettuce and tomatoes. By forming a cooperative and women’s association, small-scale farmers have the opportunity to work together to produce quantities large enough for processing and export.

After uniting farmers, Oikocredit Senegal, with the support of Oikocredit International’s equity department, helped set-up Les Saveurs du Sud. This provided a commercial company that would buy mangoes and other produce from the farming members of Copex- Sud at a fair price. In 2011, Oikocredit, along with Copex-Sud and other ethical investors became shareholders of the processing company. Since 2010, Oikocredit has provided a series of loans and equity totalling XOF 205,012,064 (€ 312,518) to Les Saveurs du Sud. With this capital, Les Saveurs du Sud built a modern processing plant to refrigerate and package the mangoes bought from Copex-Sud. The plant not only guarantees a buyer for the mangoes farmed, it also ensures year-round, sustainable employment for 150 people, majority women.

During the 2013 harvest, Oikocredit secured buyers from Europe to import Les Saveurs du Sud’s fresh mangoes to be sold in supermarkets and stores. The first containers arrived in the Netherlands in July 2013. When the mango season is over, the plant will start processing the vegetables grown by the women’s association.

The main objective for Oikocredit’s involvement with Les Saveurs du Sud and Copex-Sud was to improve the livelihoods of smallholder farmers in the Casamance region of Senegal. Part of the conditions of Oikocredit working with Copex-Sud was that women would be entitled to their own land, contributing to social development in the region. By uniting growers and investing in the agricultural value chain through both equity and loans, Oikocredit aims to build a more secure future for the rural farmers of Casamance. 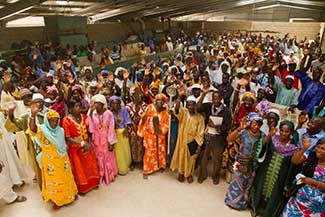